I took Carmen to the lab yesterday to return a urine sample and have some blood work done. We arrived at the lab at 4 PM, allowing plenty of time before lab closing at 5 PM. After a brief wait in the lobby, we were taken to the exam room in the back.

The lab technician came in and, after brief small talk, began looking for a vein in Carmen’s arms. I wished him, “Good luck!”. Carmen has always been a bit chunky so finding veins has been challenging in the past. As she seems to be retaining fluids (the purpose of our visit), it would seem to be that much more difficult to find a vein this time.

After about 10 minutes, he called in another tech to help. The 2nd tech looked for about 5 minutes and thought he found a vein in her left arm but wasn’t sure. “She’s cold. Let’s try to warm her up for a few minutes and then look again.” So they put warming pads on Carmen’s arms and hands.

About 5 minutes later, the two technicians returned and began looking for veins once more. By this time, a third tech joined them. All three of them took turns with Carmen’s arms. None of them found a vein.

A few minutes later, a fourth person joined us in our ever-shrinking exam room. She took one look at Carmen and then turned to me. “She looks a lot like my daughter. What’s wrong with her?”

“She has a disease called Tay Sachs,” I told her. “It’s a genetic, degenerative, neurological disease. It slowly shuts everything down.”

“No.” (Now, I’ve replayed this in my head a hundred times since and thought of at least a thousand different things I could have or should have said that would have been more hopeful. But in that moment, “No” was all that came out.)

Immediately, tears welled up in her eyes as she turned slowly and walked out of the room. She returned a few minutes later, her eyes clearly red and her nose still sniffling a bit.

I often forget that what is now normal for us is still very raw and almost unbelievable to others we encounter.

Believe it or not, it’s actually nice when people react with heartfelt sorrow, not because I want people to feel sorry for Carmen or us, but because it reminds me that this is emotional. It’s easy to become calloused to what’s going on. It’s nice to feel pain every now and again. It is a gentle reminder that I am still alive and that I still care about Carmen!

I love you Carmen!

PS. You’ll be happy to know that they did eventually find a vein in Carmen’s hand and at around 5:30 PM were able to get enough blood for everything except the blood culture. 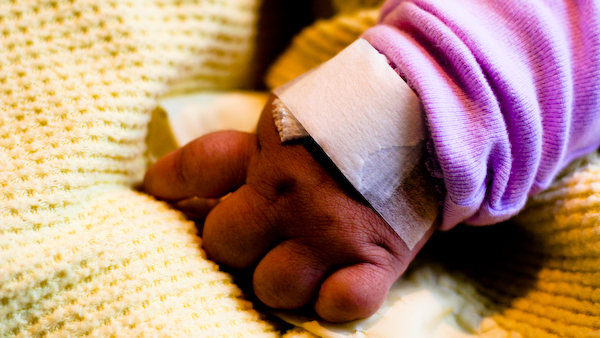 About the Author: Dave ©